Twitter is the social network with the highest rate of growth. This definitely is a very important aspect which can’t be neglected.

A lot of people believe in the power of Twitter and create accounts but here intervene the rules of this network: everything is done within 140 characters. How to present yourself or how to make your products or services well-known in such a short space?

Certainly, the charm of Twitter consists in this limitation; some people say that this prohibition is harmfully killing any possibility of advertising but the creative ones found easily new and new solutions to make an SMS message “bigger” than 140 characters.

A common solution of saying more about you and your offer is the background; the default one is pretty cool but when it is used by more than a half of the users, it becomes boring. In fact a Twitter presence can be divided in two parts:

– The written one which in fact is the bio and the tweets. 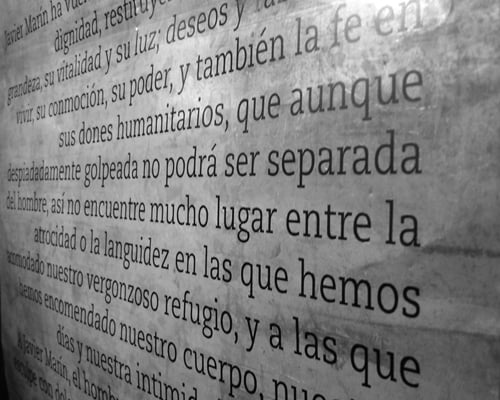 This is the most important of a Twitter account and the overall success depends very much on it. The good news is that there is a lot of information and the changes in style, the frequency of the tweets or the subject of these can be very easily changed. 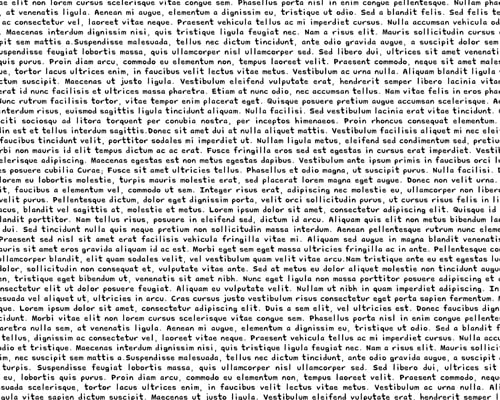 Even if the quality of the tweets is the primordial fact in the value of an account the design of it (mostly the background) can be an important player and with a lot of creativity a lot of users could land on your page only to see the cool background you uploaded.

There are two solutions in case someone decides that the default background is boring and a new one is a serious improvement:

– To ask for the services of a web designer/designer but it requires time and money and maybe isn’t the best decision;

– To create a new one on your own and this requires probably more time but it costs nothing. Nobody knows, but the final result may be appealing and the creation of backgrounds turns into a passion and further into a small business.

So let’s start learning how to create a Twitter background:

Nowadays the computer from your office or the laptop aren’t the only ones terminals which allow the connection to Internet; the smartphones or the tablets are the new and versatile gadgets that can do the same.

This is awesome but for web designers this is a very difficult task because the screens’ sizes are very different and many times these variations render the layouts not user-friendly. Twitter has this rate of growing and for that it was specially conceited for the smartphones.

I tried some time to find on the Internet a clear defined size but unfortunately none can offer the perfect size because of the various displays of the gadgets. Anyway the majority of the backgrounds started on these sizes:

Other areas which should be kept in mind while someone starts creating a background are the:

– The Twitter main center area which is approximately 760 pixels;
– The menu and the logo of the network situated in the top side which is 71 pixels wide

Another two very important areas in creating an effective background are the left and right part, albeit it is highly recommended to pay attention to the extremities near the posting area.

The effective process of designing is a very subjective task and no one can give clear explanations. The best solution is to follow some tutorials but also it is good to know:

– The majority of the users put in the left side the links to their website or multiple ways to contact them;
– If someone is in the process of branding his company the logo of it should definitely be put as clear as it is possible;
– The design should be very appropriate with the field of activity of the user; for example someone who has a blog about pets would be great to have in the design something related to this field;
– Originality is a must (too simple to say, very complicate to do).

But all these are in vain if the weight of it is bigger than 800 kb and the format isn’t GIF, JPG or PNG.

To make it easier for everyone to create the proper idea about how a background should be designed; here are a few categories:

Personally, I am not a great lover of these kinds of works; they consist in taking an expressive picture and duplicating it to fill the background.

Here are some good examples 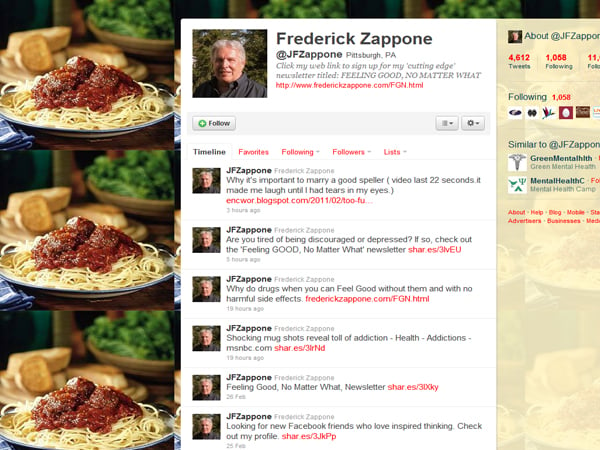 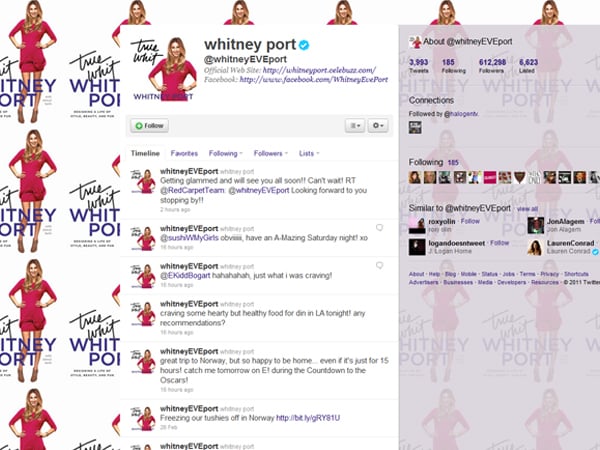 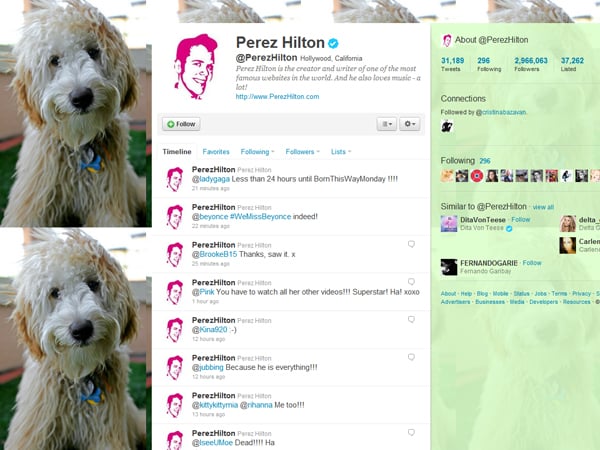 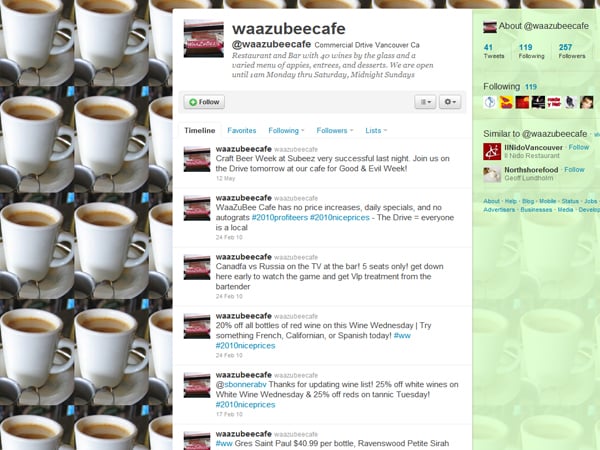 These backgrounds are very used because the overall design is always appreciated and most important, the size of the screen which can be neglected doesn’t really matter; the background will look almost the same. Check these out and enjoy! 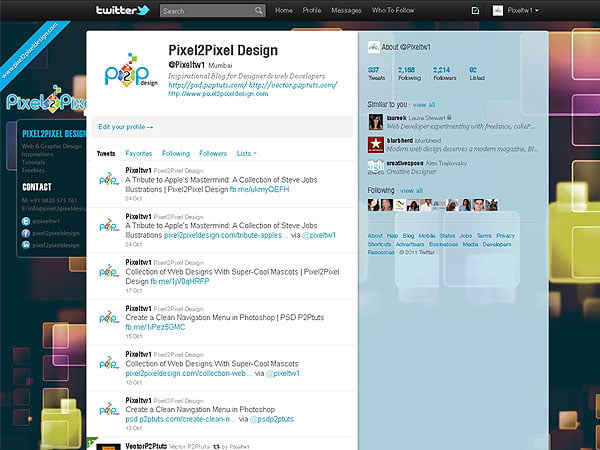 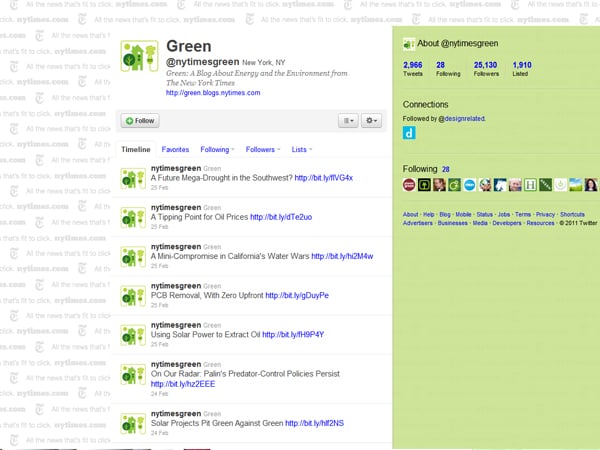 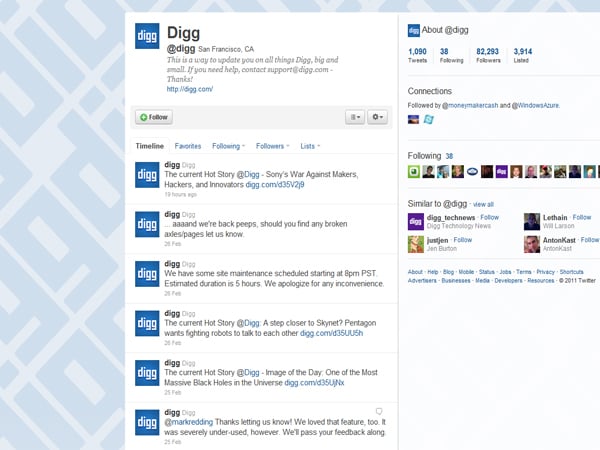 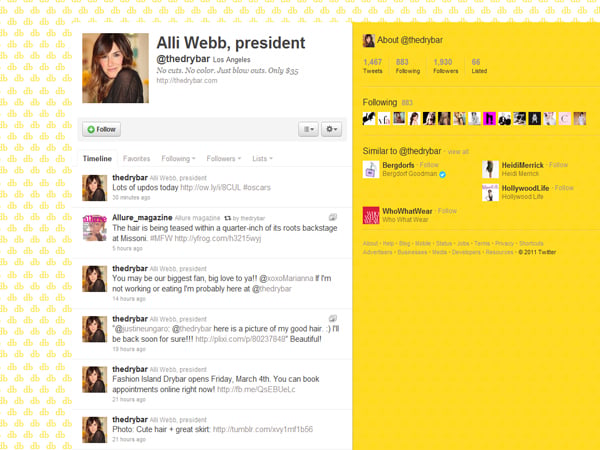 This kind of background is based on a big element and the influence of it is immense. This element could be a photo of the user or a thing which is really important for the user or even an abstract creation. 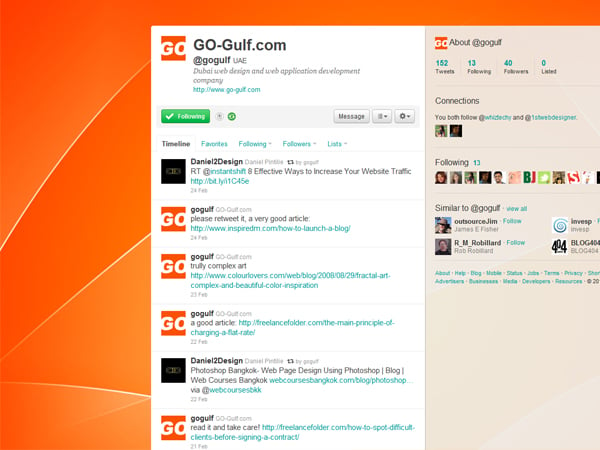 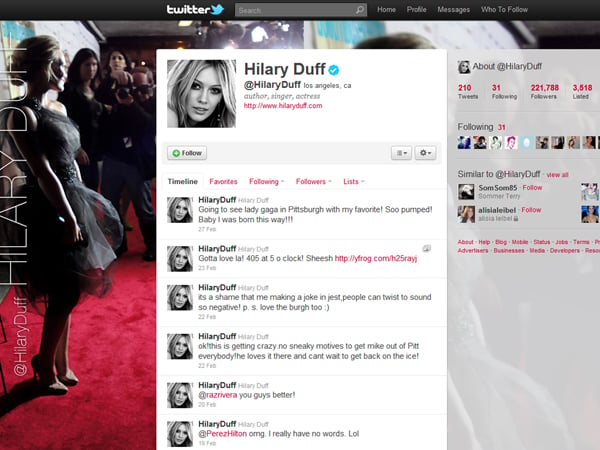 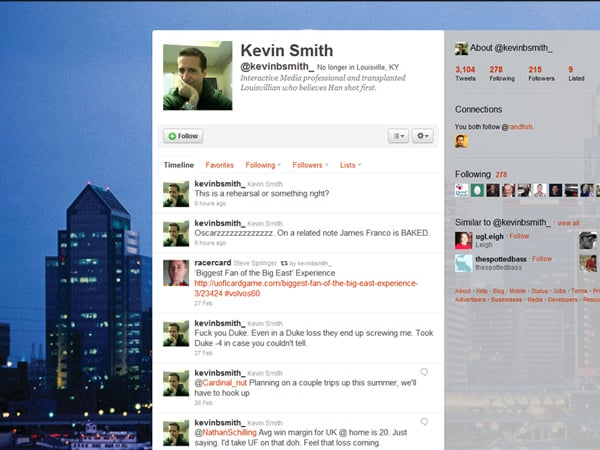 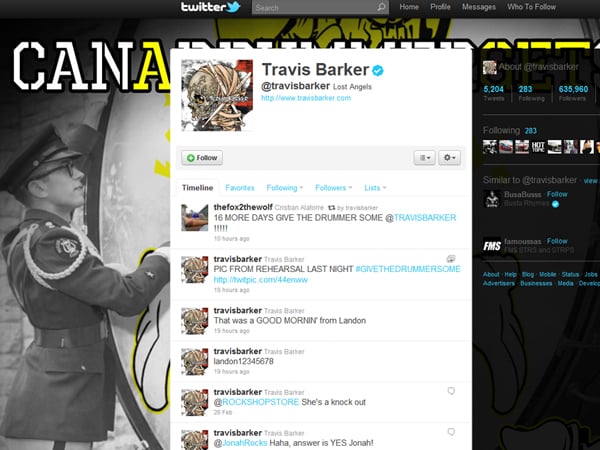 It is the business solution in the majority of cases. It consists in having more contact possibilities exposed or very important information. 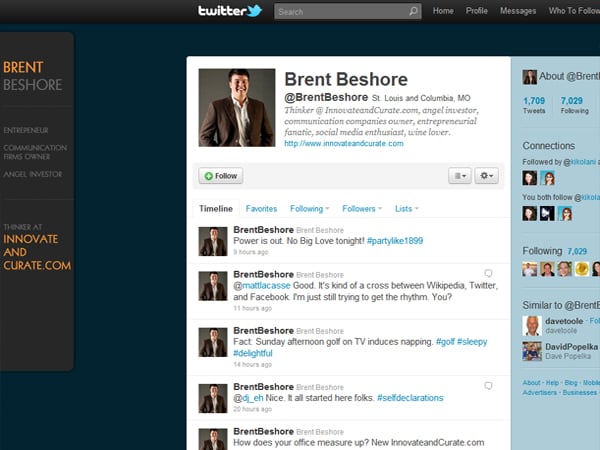 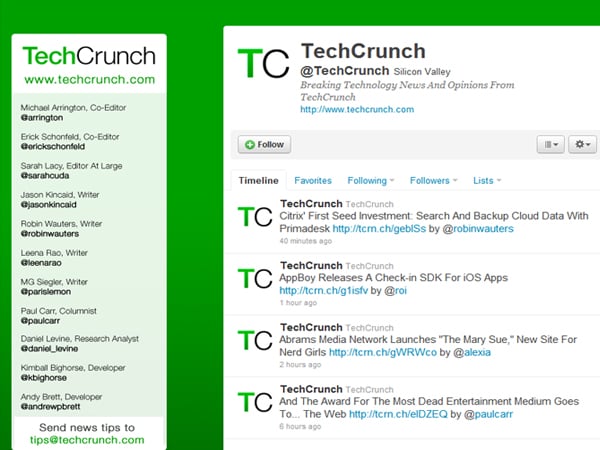 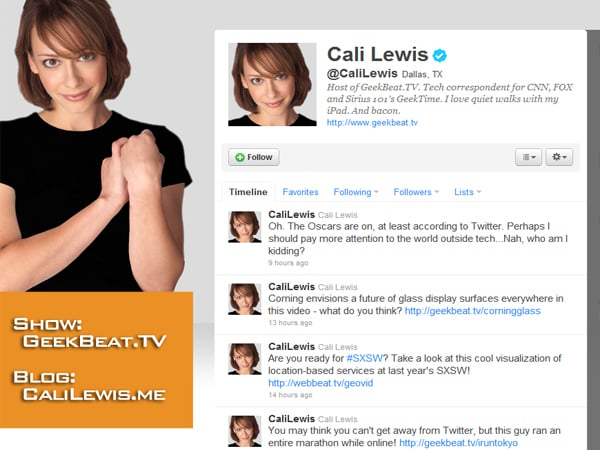 The marketers noticed the importance of a Twitter background and started using it; in fact, the first thing seen by any user in the background could be a quite important but unspeakable friend.

The designers and the developers instantly adopted the marketers' idea and created cool applications that can produce pretty amazing backgrounds. People who don't have enough time or lack design skills could also download some astonishing backgrounds.

Here are some applications which can customize your background and some websites where you can freely download some, but feel free to submit others. It will be great to know your opinion about Twitter or its background. 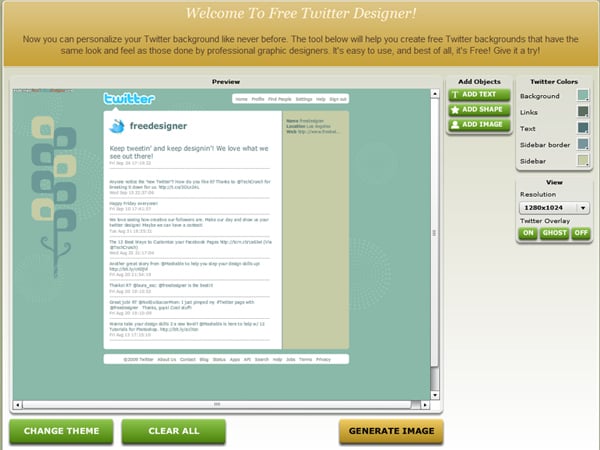 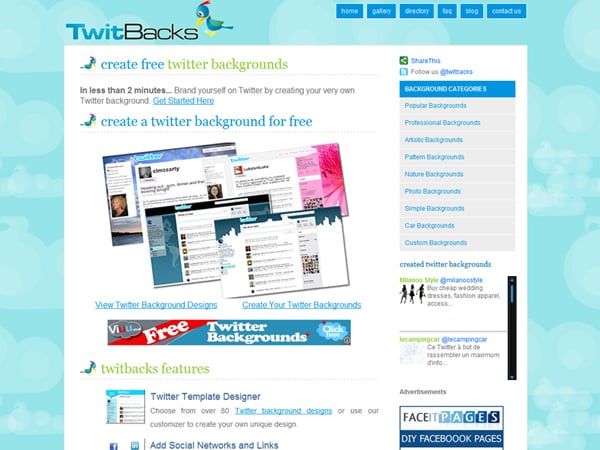 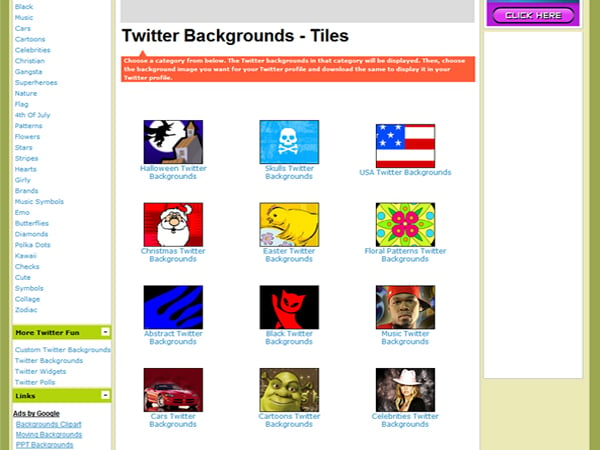 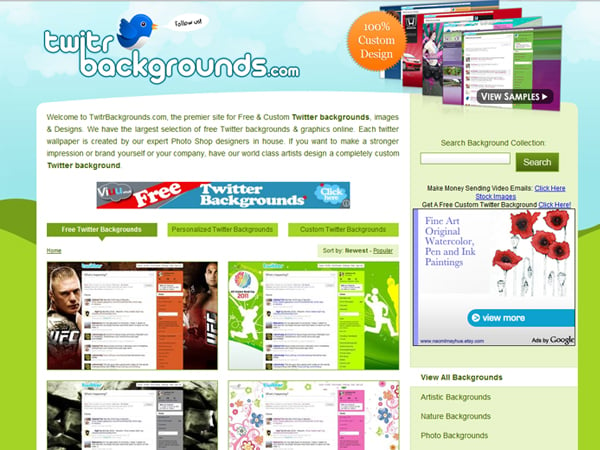 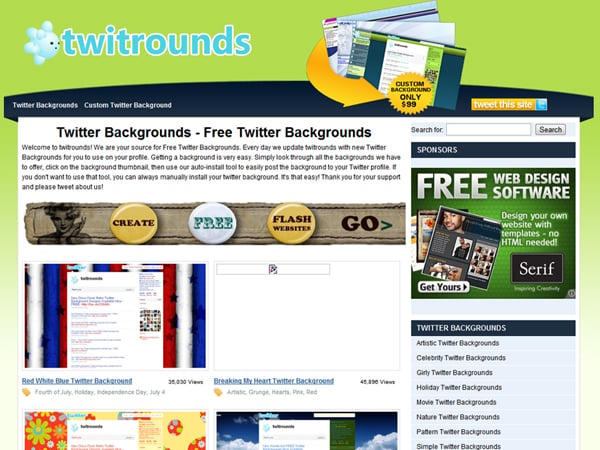 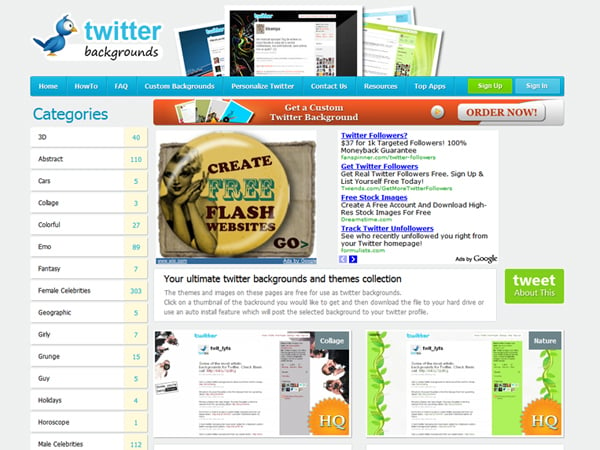 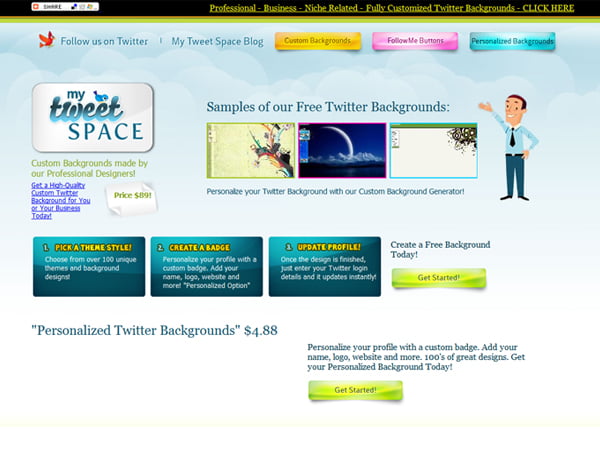 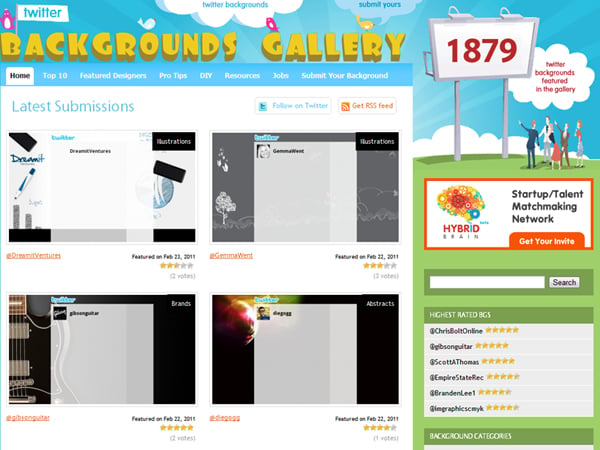